Scrolls contain Quest instructions. Clicking on a scroll shows you the details about the quest. You may then make a decision about whether you want to Accept, Decline or Close the quest scroll. Clicking Accept begins the quest and removes the scroll from your inventory. You can then see your quest progress at the top of your inventory screen. Follow this link to read more about quests.

Scrolls are typically sold by the Scrollkeeper villager but may also be found in village or dungeon loot. Expensive scrolls or loot scrolls typically have a higher value and greater reward for completing the quest. Read more about value below.

NOTE: Scrolls generate quests when they are opened (by right clicking) for the first time. This changes the name of the scroll from “Scroll Tier X” to the name of the generated quest. Reopening a scroll does not generate a new quest. 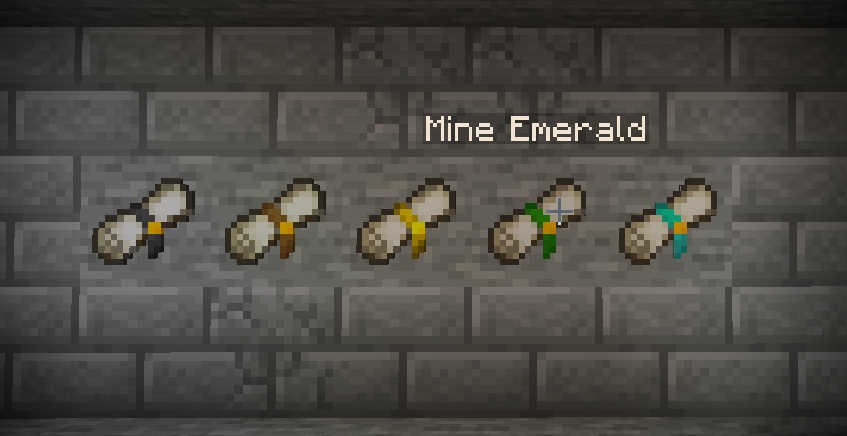 Each scroll tier increases the difficulty and reward of the offered quest. “Diamond” (tier 5) quest scrolls have the chance to reward Totems of Returning that take you to a distant Stone Circle - this helps you begin your search for underground Vaults.

All scrolls have a base value which acts as a multiplier of the Quest difficulty, the reward, and the amount of XP awarded to the scrollkeeper to level them up.

Scrolls sold for one emerald by a Scrollkeeper have the lowest base value and do not modify the quest. Often, scrollkeepers will offer two scrolls per career level, one with a higher emerald cost. The more expensive scrolls have a higher quest value and level up the scrollkeeper faster.

Scrolls found in dungeon loot generally have a higher value than those sold by scrollkeepers so quests tend to be a bit tougher - with the benefit of being able to hand in to any scrollkeeper to level them up.

Clicking Close just closes the scroll/quest information window, allowing you to accept the scroll at a later time. Clicking Decline removes the scroll from the game.